‘Don’t infringe upon our sovereignty!’ China warns US ahead of South China Sea ruling by RT website 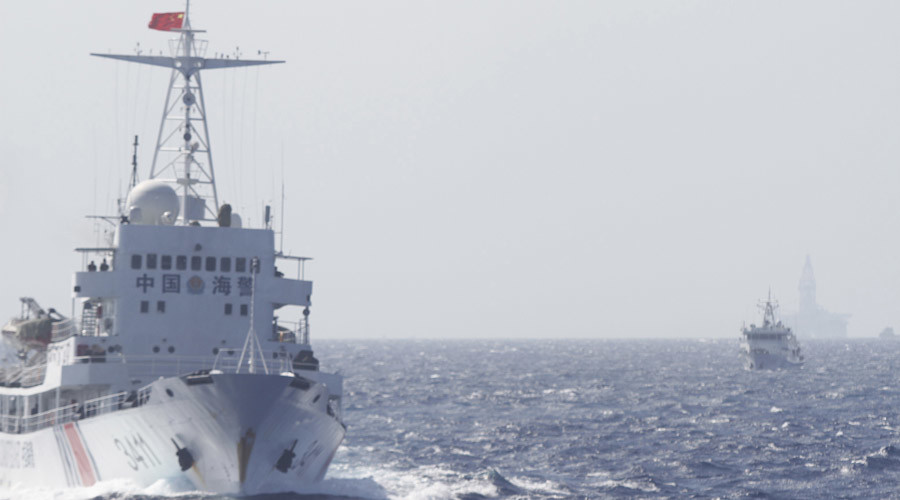 Ships of Chinese Coast Guard are seen near Chinese oil rig Haiyang Shi You 981 in the South China Sea © Reuters
China told the US not to take sides or infringe upon the “sovereignty and security” of Beijing on the eve of The Hague court’s ruling on the disputed islands in the South China Sea.
A phone conversation on maritime issues took place between Chinese Foreign Minister Wang Yi and US Secretary of State John Kerry on Wednesday, Chines Xinhua agency reported.
READ MORE: ‘Greatest threat to peace & stability’: Beijing criticizes US meddling in South China Sea region
The conversation comes less than a week ahead of the ruling by the International Court of Arbitration in The Hague on the South China Sea dispute between China and the Philippines. The ruling is due to be announced on July 12.
The arbitration is tainted “with illogical and flawed application of procedures, laws and evidence,” Wang said.

Wang once again repeated that China won’t accept the upcoming ruling, adding that “the arbitration tribunal farce should come to an end.”
“The arbitration tribunal which clearly has been expanding and over-stretching its jurisdiction beyond the limit has no jurisdiction at all [over the South China Sea disputes]… Any award it makes in disregard of the laws and facts is naturally not legally binding,” he added.
READ MORE: ‘Price to pay for US’: Beijing ready to confront Washington if it intervenes in S. China Sea dispute
Wang urged Washington not to take “sides on issues related to sovereign disputes, be prudent with its actions and words, and not to take any actions that infringe upon the sovereignty and security interests of China.”
Regardless of any outcome of the ruling, Wang said China will “firmly safeguard its own territorial sovereignty and legitimate maritime rights” in the South China Sea, the agency added.

Earlier on Tuesday, China said it is ready to confront the US if it intervenes in the South China Sea dispute by force, the Chinese Global Times newspaper reported, adding that Beijing should accelerate developing its strategic deterrence capabilities to contain Washington’s forces.
READ MORE: What tensions? Chinese ships join US Navy in massive Pacific exercise
China has repeatedly claimed sovereignty over particular islands and reefs in the South China Sea and its adjacent waters, and has taken steps to protect it. However, Beijing has always said it’s open to solving the disputes through direct negotiations between parties without outside help and interference.

Beijing to participate in US naval drills amid South China Sea tensionshttps://t.co/AEpJkzbVN1pic.twitter.com/Z7Dphq409P

The South China Sea disputes involve the Spratly and the Paracel groups of islands. Beijing’s territorial claims to the islands partly overlap those of the Philippines, Vietnam, and Taiwan, while Beijing also has ongoing territorial disputes in the area with Malaysia and Brunei.
The US is trying to demonstrate force in the region by increasing its military strength and that of their allies. Several of its warships have strayed into the disputed waters, and the US has flown numerous surveillance missions over the area.

Re-post: Helga Zepp-LaRouche Makes ‘An Appeal to American Citizens: What the World Needs from America!

SEN. AQUINO EMPHASIZES ON SUPPORT FOR MSMES FOR INCLUSIVE GROWTH

All systems go for CARS Program; application open to all car and car parts...